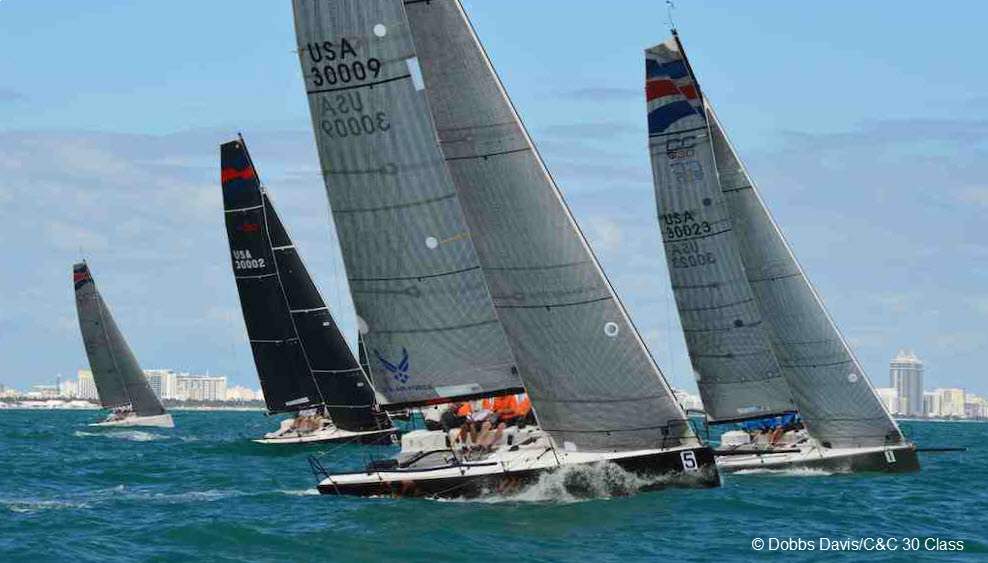 In an exciting start to the first ever stand-alone class event of its type, the C&C30 Miami Ocean Challenge held at Coconut Grove Sailing Club in Miami, Florida certainly delivered. In changeable conditions which varied from huge seas with winds of 18-25 knots on Friday to 4-9 knots on the final day, Sunday, the lead changed multiple times with over 80% of the boats partaking winning an individual race.

Dan Cheresh and Extreme2’s victory did not come easily however, ahead on points going in to the final day and leading the first race of the day, the team experienced a broken spinnaker sheet to come in fourth place and cede the lead to Jim Madden on Stark Raving Mad VIII. This placed Stark Raving Mad VIII in the lead for the series by two points but Extreme2 came back to win Race 9, Madden’s team taking second, and closing the gap to just one point.

This set up an exciting final between both boats and Extreme2 found a gap 10 seconds into the race and accelerated ahead to take a narrow lead. When Madden tried to tack to the right and overtake Cheresh, he found his way blocked by Extreme2. John Heaton on Hooligan tacked and crossed the entire fleet with the largest margin of any in the whole series and held their position until the end of the race, to win their one and only race of the series. Extreme2 had by this time extended their lead on the rest of the pack and came in second, securing their win.

Cheresh was very complimentary of both the C&C30 and this unique class, ““These boats are really fast, stable and the competition is really tightening to where one mistake can really cost you. But I also like how the camaraderie is developing in this class, it’s becoming really fun. I look forward to our next class event at Charleston Race Week.”

Racing to Cuba on the C&C30 Bobsled