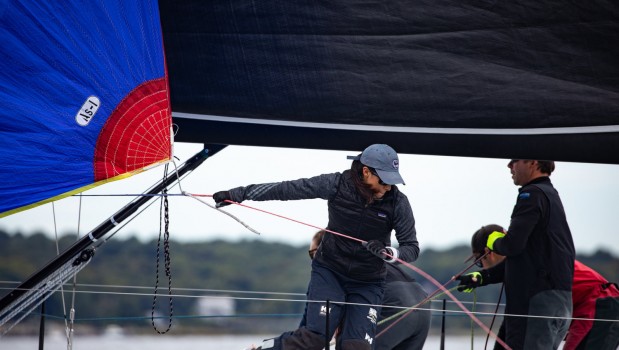 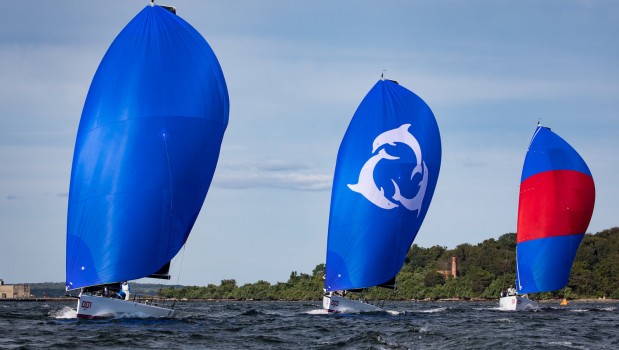 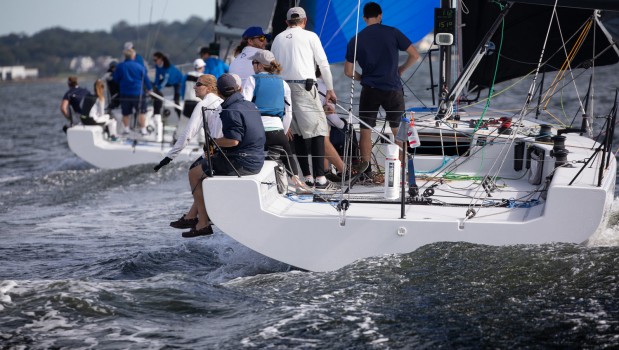 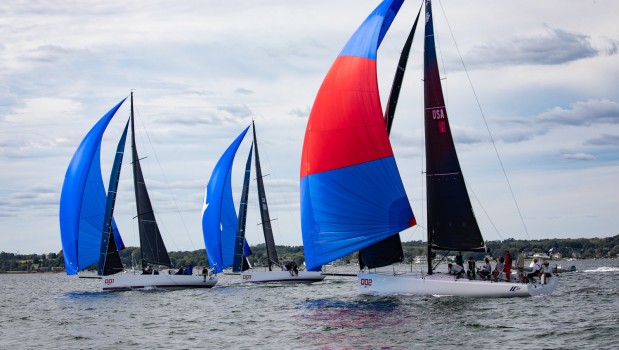 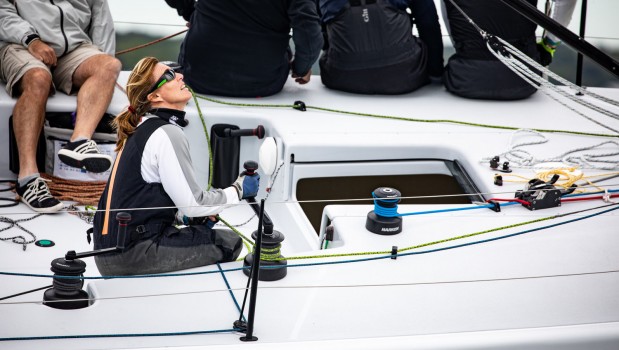 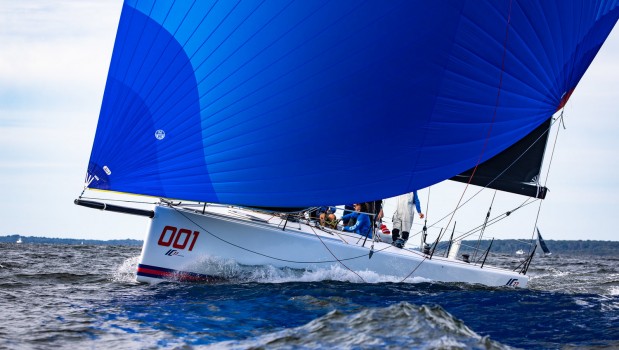 NEWPORT, R.I. – After a summer of commissioning work, sea trials and the occasional weeknight PHRF race, the New York Yacht Club’s first three IC37s lined up for two days of one-design racing on Narragansett Bay on the first weekend of autumn. While the fleet was small, especially compared to the pack of 20 or more boats that will charge the starting line at each IC37 regatta next summer, it was nonetheless a revelation to see this slick 37-footer in its natural environment, namely racing boat-for-boat with full amateur crews.

“We have something special here,” says New York Yacht Club Rear Commodore Chris Culver, who led his team to victory in the event over those skippered by Commodore Phil Lotz and Paul Zabetakis, who chairs the Club’s IC37 subcommittee. “It will be a rewarding sight when we have 20 of these racing thoroughbreds on the line next spring.” 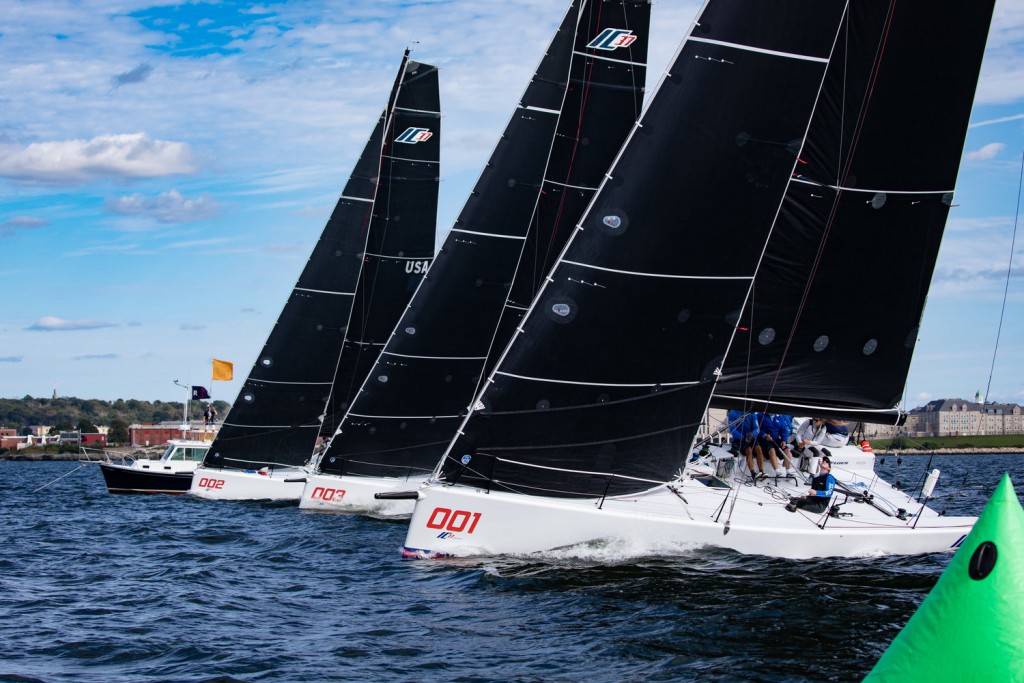 It has been approximately 16 months since Commodore Lotz announced to the membership the Club’s intention to build a fleet of 20 one-design yachts for use in the Club’s flagship event, the Rolex New York Yacht Club Invitational Cup, and for race charter by members. Mark Mills was chosen to design the yacht with Westerly Marine in Santa Ana, Calif., selected as the primary builder. Melges Performance Sailboats will lead the worldwide marketing of the boat and the development of the class. Overwhelming interest from the sailing world led to the addition of a second builder, FIBRE Mechanics, in Lymington, Great Britain, this summer. North Sails will build the class’s one-design sails. Class rules require that all crew be World Sailing Group 1 (amateur) sailors and that each team has at least one woman, two if the team has eight or more people.

The first boat arrived in Newport in April and has been sailed extensively in the time since as numerous industry professionals worked to optimize the deck layout, sail and rig tune and crew mechanics.

“After this weekend, we can safely say that the IC37 has met, and in many cases, exceeded our design specifications of two years ago,” says Zabetakis. “We asked for a modern race boat incorporating the latest hull and rig design with a deck layout planned for maximum efficiency for around-the-buoys racing and that’s exactly what we have. The boat is stable both upwind and down, maneuvers extremely well in tight spaces and accelerates quickly. The time we spent in defining what we wanted, and, as importantly, what we did not want, has clearly paid off.”

“The IC37 is an interesting blend of a technical, high-performance boat with a pure one-design,” says Emory. “As each boat had the exact same equipment, the regatta was a true test of which crew could better use the available tools. It was extremely fun and challenging to be on such a level playing field. Crew work is very important. One blown maneuver can be very costly.”

Westerly Marine and FIBRE Mechanics are on track to deliver the Club’s fleet of 20 boats by early spring. Once the two companies have fulfilled the that order they will start delivering boats to private customers on both sides of the Atlantic and elsewhere around the world. The Melges IC37 Class Association is drawing strong interest from sailors hungry for a larger one-design that delivers exceptional performance while keeping expenses to a reasonable level.

“We’ve thought through every aspect when it comes to building a sustainable class association and strong community centered around this new one-design class,” says Harry Melges III, CEO of Melges Performance Sailboats. “This is a powerful, game-changing step forward for the sport because it’s a cost-controlled class that still delivers world-class racing performance. All around the world, sailors are placing private orders to join.”

The 2019 racing calendar includes a number of regattas based out of the New York Yacht Club Harbour Court in Newport, R.I.

ABOUT THE MELGES IC37 CLASS

The IC37 by Melges is a 37-foot modern race boat exclusively for Group 1 sailors. The strict one-design class will provide simple, fun, competitive racing for the Corinthian sailors of the world. The Melges IC37 Class is designed by Mills Design, built by Westerly Marine (Santa Ana, Calif.) and FIBRE Mechanics (Lymington, U.K.), powered by North Sails and managed by Melges Performance Sailboats. The IC37 is the official boat for the Rolex New York Yacht Club Invitational Cup and the Canada’s Cup. Learn more at MelgesIC37Class.com. The MelgesIC37Class is on Facebook, Instagram, and Twitter.